Discover the most interesting sights in Tremosine sul Garda

Find out what you can visit in the surrounding area

Tremosine sul Garda:
so much to be discovered!

Lake Garda shines at the foot of Tremosine, and reflects the beauty of the mountains and the sky in its waters,
while the trees and woods that frame this painting fill the air with the aromas.
It is not a dream: this is the atmosphere you will experience once you get here!
You can spend days outdoors in the sun and enjoy some hikes immersed in unspoiled nature. Rediscover the pleasure of surprising yourself  and rediscover tranquility away from the stress of everyday life. 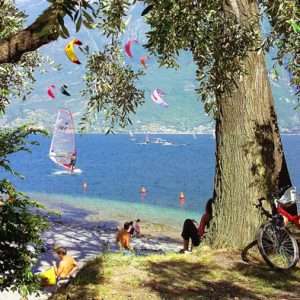 The perfect destination for water sports enthusiasts and more. Located on the shores of Lake Garda it is a great spot to enjoy several outdoor activities or simply relax. Here you have all you need to spend a memorable vacation.

Here you can find one of the most beautiful beach of Lake Garda, modern accommodation facilities, restaurants and bars to ensure an unforgettable holiday. Campione del Garda is well known for its beach and for any types of water sports activities. Wind always blows here allowing kitesurf, windsurf and sail lovers to have high performances. 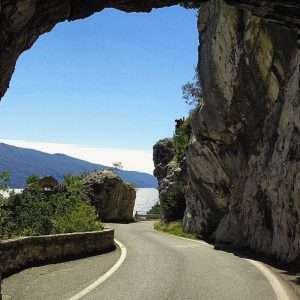 One of the highlights of Tremosine! This stunning road connects Pieve di Tremosine to the lake. A real gem, set in the bowels of the mountain, along the rift carved by the Brasa stream

Anyone looking up at the houses of Pieve lined up on the edge of the plateau, about 350 meters above the lake level, will ask how a road can ever reach up there. For centuries, the steep path joined the port to the town, for centuries men and women carried on their shoulders firewood, coal, oil, wheat. Once at the port, there was the wide stretch of water to cross to Desenzano, Torbole and Bardolino, by boats and barges until the second decade of the 19th century when the steam boats made their appearance on Lake Garda. The locals had to wait until 1913 when, based on the project designed by Arturo Cozzaglio and through the action of Father Giacomo Zanini, the priest in Vesio, a road connecting the lake port with the hamlet was finally built and named “Strada della Forra” (The Gorge Road). 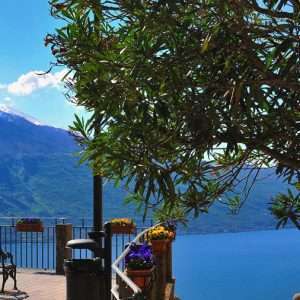 Piazza Arturo Cozzaglio is in Pieve di Tremosine. This square is one of the  best breathtaking view points overlooking Lake Garda and the majestic Monte Baldo.

What makes Pieve unique are the breathtaking views overlooking the lake, also known as the terraces of the thrill.

These are the most spectacular viewpoints:
– Piazza Arturo Cozzaglio
– Vicolo Scaletta
– the churchyard 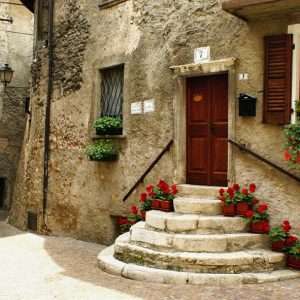 In Pieve if you ask who the most famous person is, they’ll answer “l’Arturo”, as in “l’Arturo della scala tónda” (Arthur of the round stair–way). His ancient and modest house still stands with its original internal furnishings, the windows and the famous external stairway where he loved to sit. The stairway is of singular shape – round – certainly unique for this town, and Arturo liked it so much he began to identify himself with it more than with his surname. In his honour, Pieve has dedicated him a town square and a plaque 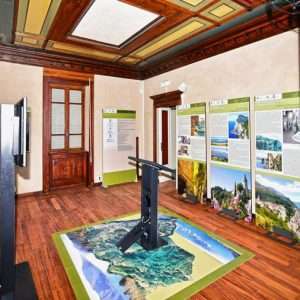 “Must” stands for the Tremosine Museum, an exhibition center dedicated to the events of the Great War on the Upper Garda and, more generally, to the history and territory of Tremosine. 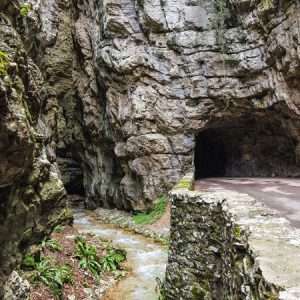 The valley of forges and mills!

It extends north-east. Wide and grassy near Villa, it becomes steeper and steeper as it approaches the lake. Little exposed to the sun, it is characterized above by the typical vegetation of the submontane area (hornbeam, ash, pine ..) and, near the lake, by the Mediterranean vegetation (holm oak, wild rosemary). The valley is crossed by the homonymous Brasa stream

According to the studies of the geologist Arturo Cozzaglio, the waters of the Brasa come from the Bondo stream which, buried upstream, crosses the moraine on which Vesio rises to gush out at about 550 meters above sea level.

The stream, now small in size, winds its way tortuously, sliding into a bed about one meter wide; its bottom is made up of pebbles, boulders and gravel.

Its flow rate is modest, about 200 liters per second, but constant. Its waters are cool, with a temperature ranging from three to sixteen degrees.

The torrent was the main source of energy for the factories in the last century (approximately from 1850 to 1960) in the Brasa valley. There were in fact a leather tannery, mills for grinding wheat and maize, forges for nails.

In the Valley you can see some rest of the past. 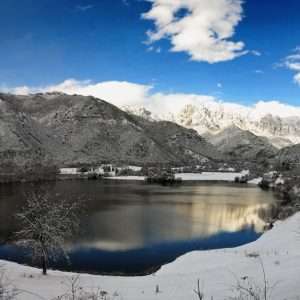 The name derives from the Celtic “bunda”, basin. The Bondo valley was dug by the river of Bondo, which formed a single course with the Brasa. About 100,000 years ago, during the last cold phase of the Alpine glaciation, the trench now occupied by Lake Garda was invaded by a glacier that also penetrated the side valleys, such as the Bondo-Brasa valley.

Starting 15,000 years ago, the climate became milder and the glaciers began to retreat, leaving behind the transported material, i.e. the moraines.

One of these, La Pertica, barred, like a natural dam, the Bondo valley and the river, which descended from the buttresses of the Corno della Marogna and Passo Nota, formed a lake.

Over time, the lake filled with debris and became a plain. The water of the river, today, is lost in the sands and re-emerges downstream in the sources of the Fucine and Val Brasa. In the subsoil, however, some impermeable clayey layers, during heavy rains, retain the water itself and therefore the lake of Bondo reforms.

Once, when the vegetation of the valley was scarce and the water descended abundantly from the sides, this phenomenon was frequent, today much more rarely. The valley is crossed by the Vesio-Passo Nota- Tremalzo road. 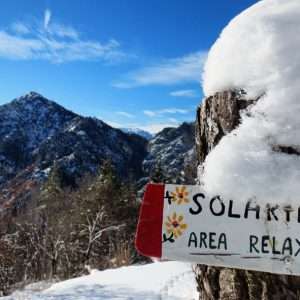 On the tracks of  the Great War at Passo Nota, Val Cerese and Fortini

Already in Roman times the pass was a notable communication route between Garda and Valle di Ledro and was crossed by a road. In 1703 up here the French and Austrians fought each other. A clearly visible plaque in the pasture remembers those days. Numerous armies passed through Passo Nota, in 1796 the Austrians defeated in Lonato by the French, in 1859 the Austrians who went to fight in San Martino and Solferino, in 1866 some Garibaldi departments were preparing for the battle of Bezzecca.

In the First World War it became the pivot of defense on the Upper Garda Front, so much so that it hosted the Sub-Sector Command.

A mighty defensive complex was built there consisting of two orders of entrenched lines supported by numerous artillery batteries located on the dominant ridges.

Today it is possible to follow several kilometers of emplacements, with ambushes in caverns, concrete casemates and pitches for cannons, well connected by spectacular military roads carved into the rock and by a capillary network of paths that can still be traveled today.

All the routes can start from the Alpine Refuge of Passo Nota, easily accessible by car and mountain bike. 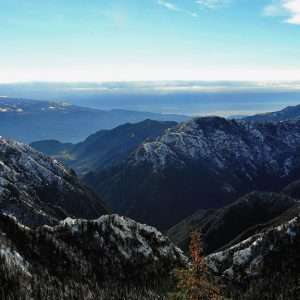 With its 1976 m it is the highest peak in the Alto Garda Bresciano Park, also called Cima delle Guardie since, in the past, it marked the border between Italy and Austria. An excursion of great historical interest.

The highest mountain in Tremosine, a site of extraordinary floristic interest due to the exceptional concentration of endemic species, known throughout Europe and a must for botanical excursions. The wild and little anthropized environments are still frequent. The site is of significant national and  provincial interest due to the presence and reproduction of animal species in danger of extinction, important glacial relics, exclusive and typical of the Alps. 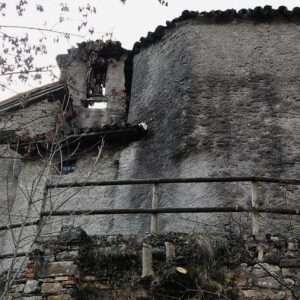 Evocative sanctuary, in the homonymous beautiful valley. The building stands on a hill and suggests an ancient fortified site.

The Hermitage of San Michele is located in the heart of the Alto Garda Bresciano Park, in an isolated location surrounded by the Western Gardesana Forest, the largest state-owned forest in the Lombardy Region. The San Michele valley is located at the foot of Monte Tremalzo, on the border with Trentino and the Ledro Valley.

A first uncertain hypothesis about the origin of the church of San Michele Arcangelo, one of the oldest in Tremosine, claims that its construction was the work of the Lombards, of which the saint was protector after their conversion to Christianity, which took place in the eighth century.  But St. Michael was also patron of those who – to work – used fire: charcoal burners and forge workers, for example, who were once very numerous in that area.

The building stands on a hill and suggests a fortified site. On the surface, fragments of early medieval pottery were found which, together with the title of the church, suggest a dating of the complex to the early Middle Ages. The church, with a single hall and polygonal apse, can be traced back to the 14th century. In the lower part of the perimeter walls, however, older construction techniques can be seen. In 1679 the Veronese priest Florenio Feliberi, established a hermitage where he lived and died and was buried.

From the most spectacular cycle path in Europe, the ancient Limonaie, to the Vittoriale degli Italiani.
Combine your leisure holiday with a historical cultural break.

This cycle / pedestrian path  overlooking the lake is considered to be the most beautiful cycle path of Europe. You should not miss it!

On 14 July 2018, the spectacular cycle path that from Capo Reamol of Limone sul Garda reaches the border with the province of Trento was inaugurated.

The suspended cycle path is a total of 2 kilometers long, but the complete route from Limone downtown is about 5 km one way.  It is beautiful during the day and wonderful by night, thanks to the led lighting, the trail is accessible h 24.

If you are traveling by bicycle, please do not exceed 10 kilometers per hour.

Towards the north, the track ends at the border with Trentino region  and joins the main road the SS 45bis, better to avoid to be on this busy road,  that’s why we recommend you to g back to Limone on the same cycle/pedestrian  path. 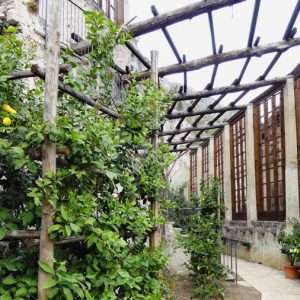 At the lake Garda there are still lemon houses, the characteristic greenhouses where, starting from the end of the seventeenth century, citrus fruits were cultivated for commercial purposes. Some have been restored and opened to the public. 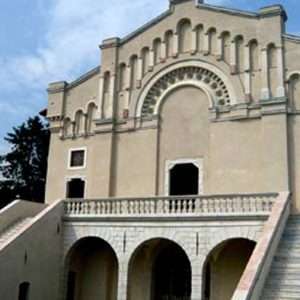 The Sanctuary of Montecastello is located in a very beautiful panoramic location on Lake Garda, which can be accessed from Tignale along a steep road flanked by chapels illustrating the Mysteries of the Rosary. 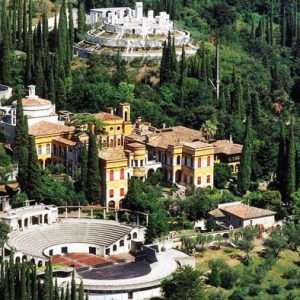 Built between the 1921 to the 1938, this is not just the D’Annunzio house, but a monumental citadel with a set of buildings, streets, squares, theaters, parks, waterways. 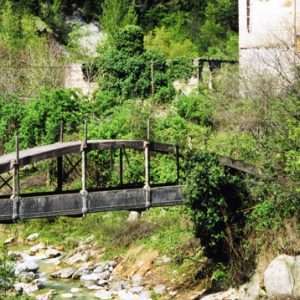 The Maina Inferiore Cartiario Center is a fascinating production complex transformed into an exhibition and museum venue. Inside, the stages of the history of
paper production are retraced.
Learn more 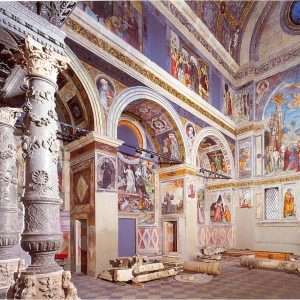 Unique in Italy and in Europe for its exhibition concept and location, the Museum of the City of Brescia, set up in a monastic complex of Lombard origin, allows
a journey through history.
Learn more 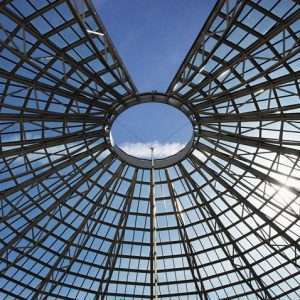 At the museum of modern and contemporary art of Rovereto and Trento you can find permanent and temporary exhibitions.
Learn more

Having read the Privacy Policy, I give consent to send me by email information and promotional communications, including newsletters, regarding products and/or services sold by this website or third parties.